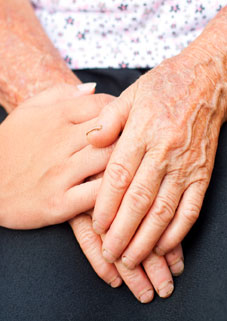 Imagine a Christmas where, after a traumatic relationship separation, you find yourself alone and destitute in a new town with two small children. That is where I found myself leading up to Christmas in 1988. We had a bag of clothes each and one bed – no dining room table, nothing to sit on, and no washing machine.

Three days before Christmas there we were, trying to make decorations out of newspaper, when we heard a car pull into the driveway.

Then came that familiar voice calling, “Sharon, are you home?” It was my Mum, with my aunt and uncle in tow. I was speechless, but Mum being Mum just said “go and help your uncle unpack the car, we’re here for Christmas”.

I believe this was the best Christmas we ever had. Mum and the others had thought of everything: food, presents, even decorations for the tree.

When I mentioned the little matter of no furniture, Mum laughed and said, “I grew up in the Depression … there’s nothing wrong with sitting on beer crates”.

And that is what we did: Christmas in an almost empty house, a big sheet on the floor for our dining table, and all of us sitting on beer crates or cushions on the floor.

It has been seven years since my beloved Mum passed away. To honour her I want to share some memories of our time together.

Mum was born in 1924 in the small King Country town of Taumarunui.

By the time I was born she had already been married to my father for 25 years, had three sons, and was about to end her marriage.

I don’t remember much of my early childhood or the separation that led to their divorce, but it must have been tough for Mum raising three sons and a visually impaired daughter on her own.

Somehow this tenacious little woman coped, and we all made it to adulthood in one piece.

In the years after that memorable 1988 Christmas I met and married my current husband, welcomed our youngest daughter into the world, and wished Mum bon voyage as she went to live in Australia with one of my brothers.

We kept in touch regularly through letters and the odd phone call, and time passed uneventfully. Then, in July 2000, my brother phoned from Australia. He felt Mum should return to New Zealand. He said she was frail and had developed osteoporosis.

I hadn’t realised the toll this debilitating disease had taken until Mum arrived. She looked tired, and I remember thinking how small she had become (not that Mum was ever big).

Mum lived with us for just over two years. During that time she tried, as she said, ‘to be useful’, pottering around the house doing odd bits and pieces, washing and folding the clothes, and teasing me when I complained about the dishes.

She took great delight in saying, “Sharon, if you do a thing with a happy heart, it will get done faster.”

I didn’t really notice Mum slipping into dependency until early in 2001, about six months after my brother in Australia had passed away. Mum took his death badly, but we thought she was coping, resigned to the fact he was gone.

But soon things had changed. She stopped teasing me, and began avoiding having a shower or coming out of her bedroom. Then, as Mum would say, she ‘upped the ante’ by only eating certain foods. This rang alarm bells.

Mum had always been the quintessential meat and three vege person, yet here she was avoiding them. Food, it seemed, had became a thing of horror to her. It started with the meat, and comments like, “you can’t eat it because of Mad Cow disease”.

No amount of persuasion or facts would change her mind and I felt powerless, unable to break through this barrier. Eventually I stopped trying and cooked vegetarian meals for her.

This worked for a few weeks, then came the new comments: “insecticides are everywhere, you can’t trust the vegetables because they are sprayed.”

About three months before Mum died, reality hit: the woman I knew was a shell of her former self, and something needed to be done. In desperation I sought professional advice from our family doctor.

He prescribed supplements and we kept sweet-talking Mum into trying different things: muffins, fruit, anything we thought she might like.

Normal meal routines were no longer possible; it was a case of small, frequent nibbles and lots of drinks throughout the day to keep her energy up. We knew this wasn’t going to work long term, but this was my mother, who had brought me into the world, raised me, loved me, and who had been there in my darkest times.

We had to try. The lack of real food and Mum’s smoking eventually took their toll. Four days before she died, Mum began coughing up brown mucus. As a rest home caregiver, I knew this wasn’t good and thought Mum might have a chest infection.

Our family doctor was called and confirmed my suspicions. Antibiotics were prescribed, with the usual instructions to give lots of clear fluids. The next day Mum went into a kind of delirium, rambling and fidgeting. This time the doctor ordered an ambulance and blood tests.

Initially Mum was taken to a local rest home’s total care unit. Then the blood test came back indicating her potassium levels had gone through the roof. No one could tell us why this had happened or what would happen next.

Mum was quickly transferred to Taranaki Base Hospital where, over the next few days, she deteriorated, then died. She had slipped into what appeared to be sleep, her final moments peaceful. My oldest daughter sat on one side of her and I sat on the other. We were glad to be with her.

Since Mum’s passing, people have asked me how I felt about looking after her, and why I did it.

I never gave the decision to care for Mum much thought. She was Mum and she needed me; taking care of her just seemed the right thing to do. I felt privileged that Mum trusted me to take care of her and, if given the chance, I would do it all over again.

People have also asked how I coped when things got tough. To this I can only say I was lucky. I had the support of a loving husband, my two oldest children, a caring GP, and friends.

Having a strong support network is vital for anyone caring for a family member. For me, having this support meant I could just get on with things. If I needed time out there was someone to take my place, and if I got stressed there was always a shoulder close by to cry on.

Although the years have rolled by and there is now some normality back in our lives, Mum is still very much with us in our memories, and frequently mentioned in our conversations.

This holiday season will be the same as always: we will remember Mum and talk about her almost as if she is still with us.