At the excellent squash centre in central Wellington, as at many such venues around the country, people who care are shrugging on their T-shirts and shorts and buckling down to the enjoyable business of belting the living daylights out of a tiny piece of circular rubber.

Some of us, perhaps, reflect as we go on the sport’s 12th century French origins, when boys and girls – not a few of them in the then unrecognised special needs category, one suspects – first played a ball game like it in the narrow streets of their villages, slapping balls along the awnings or roofs that lined the street or into shop and door openings. But mostly we’re there to think about ourselves. It’s times like these on the squash court when life presents an opportunity – perhaps one of the very few opportunities in our weekly schedule – to be so therapeutically selfish.

The benefits for anyone playing squash are already well known, and en route to the pantheon of sports trivia. An intensely competitive sport, squash improves strength in one’s legs, arms and torso, offering a proven upper body workout while burning more calories – up to 1000 an hour – than any physical activity this side of boxing. Squash improves fitness and reduces sickness. It has been called the healthiest sport in the world. And it’s a social activity.

Another game for the road? You bet.

While exact numbers are impossible to quantify, what anecdotal evidence I’ve gathered during such sessions over recent years suggests that a disproportionate number of carers are involved in this sport and, one suspects, many others like it.

After all, as somebody recently put it to me in as many words, if one can’t set aside time to care for oneself, then pity one’s chances of caring for anyone else.

Certainly, that has been my own experience. I rediscovered squash around the time my young son was diagnosed with autism, a neurological disorder affecting speech, behaviour and empathy on the child’s part, and often, as well, placing significant demands on the financial, emotional and physical wellbeing of those supporting them.

Up until that point, squash had been a sideline interest at best for me, something to while away the odd morning following an over-refreshed evening on the town, or when the physical indolence of the journalistic life became too great.

Now, I play five or six times each week, for enjoyment and relaxation, to be sure, but also for the stamina that caregiving invariably requires.

Such stamina becomes all the more challenging to muster as the years fall away in the rear-view mirror.

The English author Nick Hornby has written, heartbreakingly, of the “30 terrifying years”, which is to say, an offspring’s average time on earth after their parents die. Almost any parent in the role of caring for a disabled kid knows what that means. Less well appreciated is the way in which one’s own living future can also assume slightly terrifying contours as the reality of ongoing care for an offspring grows ever more burdensome with the passing of time. For all the heightened awareness of autism these days – it is now among the most financially successful and mediagenic disorders ever – the number of serious care programmes for adult autists remains notably low, with the assumption apparently being that ageing parents will somehow fill the gap.

So those of us still in the prime of our chronological life clearly have a lot of limbering up to do. Of course, such individuals also tend to be the ones who are often not in a position to make any such sporty commitment; all the same, not at least considering it might be an even worse option.

For a long time now we’ve heard, accurately enough, how special needs children are often relegated to the sporting sidelines, consequence perhaps of a widespread but unfounded belief that they are incapable of participation in athletics. To be sure, autistic children in particular can be difficult to motivate and resistant to exercise, but the evidence seems to be that certain sports can ease the repetitive behaviours that are part and parcel of the condition.

Even children like my son, who are considered “low functioning”, The New York Times reports, may excel at activities like swimming, martial arts, running and surfing – sports that don’t entail having to read social cues or figure out when to pass the ball. The battle over getting these kids into sporting activities may be partially won, but another related challenge hovers in the background.

Absent throughout much of this discussion has been what adopting a regular sport – or fitness activity or yoga technique or dance class – can achieve for the relevant caregivers, required as we often are to manifest unusually deep wells of the patience, calmness and personal maturity that a decent regular physical activity can help abet.

A relevant computer search on the subject comes up depressingly empty.

Caregivers, moreover, are always at risk of becoming socially isolated from the world outside their immediate family and work, which probably explains at least part of the recent finding that we are twice as likely as most people to eventually suffer some kind of mental breakdown, so anything that simply allows one to remain more connected to the outside world has its own reward above and beyond the aforementioned physical benefits.

To repeat what the guy at my squash club says, how can anyone presume to care for others if they aren’t caring for themselves?

Read David’s book, A Perfect World, about his quest to understand autism, and how different countries support those with the condition and their families. The book is available from libraries, at bookstores and as an e-book at www.amazon.com You can also find copies on TradeMe. 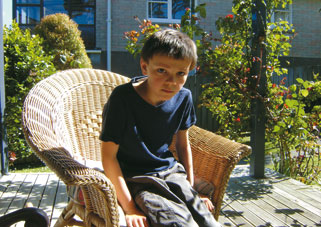